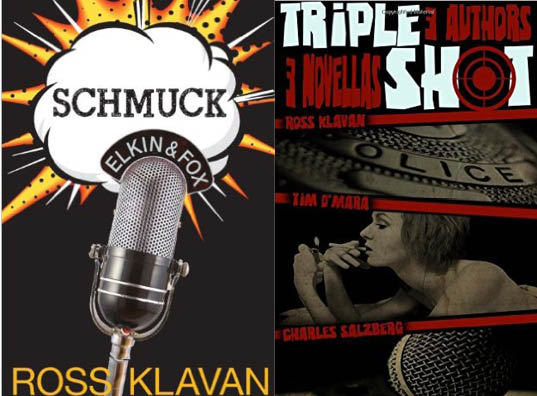 Ross Klavan is the person you always wanted to be. At least I feel this way. His novel, “Shmuck”, was published in 2014 and he recently finished the screenplay for “The Colony” based on the book by John Bowers. He has a vast past in writing screenplays, doing voiceovers, and covers stories as a reporter for New York City and London, England. Can you also recognize him by his television and radio commercials?

BD: What turns you on creatively, spiritually or emotionally?
RK: These days it’s enough just to wake up in the morning ‘cause I now side with that adage that “Every day above ground is a good day.” If you want to get esoteric, I like the ancient Chinese Buddhist idea that every moment is a moment of enlightenment. I’m not sure what you learn that way—maybe nothing or it doesn’t matter—but it makes things sort of interesting.

BD: What turns you off?
RK: Have you ever had any serious dental work? Anything that’s like that—literally or metaphorically—is a major turn off.

BD: What sound or noise do you love?
RK: I used to have a pet bird so I’m convinced that birds are trying to communicate something important to us that we’re not quite getting. Great sound. So is light traffic at night in the city. And sex sounds either very close up or from several doors down the hall, with just that slight element of distortion.

BD: What sound or noise do you hate?
RK: Car alarms are ear killers, robo-calls, people trying to give you a political harangue.

BD: If you could have drinks with any author or literary figure, whom would you invite?
RK: This is a tough one. Assuming I could understand him, Tolstoy would be fun to drink with in his drinking days because he’d have a lot of great stories and afterwards, you could throw your glass into the fireplace. Maybe Nathanael West because he was hilarious and could really drink. Then maybe Freud and Proust. Because Proust knew a lot about wine and Freud would know a lot about Proust.

BD: What profession other than your own would you like to attempt?
RK: I’d much rather be a cartoonist or a dancer, or possibly both at the same time.

BD: What profession would you not like to do?
RK: I’d never want to work in a funeral home or do anything where you had to hunt zombies.

BD: What would you choose for your last meal?
RK: For my last meal, I’d choose something that I could easily keep down. Because I plan to be copiously throwing up on the way to my execution.

Have you missed any of our Ten Questions series? You can catch up on all of our author interviews here.

Don’t miss any of the bookish fun. Subscribe Now!