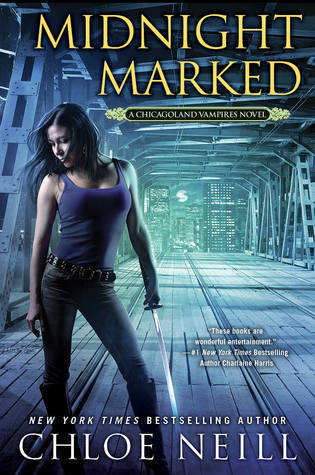 I’ve been seeing posts about the next Chicagoland Vampire book coming out soon for at least the last 2 months and I made a note of it but was trying to not get too excited since it wasn’t *soon* soon. But then all of a sudden it was HERE! Let me just say it did NOT disappoint and was worth the wait!

I was introduced to this series at a time when I was kind of over vampire books so I was kind of hesitant to read them but it was recommended to me by one of my trusted book friends so how could I not at least give it a try? Luckily my library had all of them so I checked the first one out and I am so happy I did! What I love about having so many book friends and reading so many different reviews is that I know when I can trust someone. These books have all the aspects I love in my Urban Fantasy books: action, suspense, romance, and witty dialogue. Thrown in here is something I always love in books – pop culture references. I whipped through the first 11 books from my library and this is the first new release that I got to read as it came out.

“I mean, they are’t Cadogan House – more Hufflepuff to our Gryffindor – but we could use the extra bodies.” I just stared at him.

“Those books are quality, Sentinel. You should read them.” He said it like he was the first person to discover the books, to realize they were good. I decided not to mention my first editions.

Midnight Marked is #12 and the second to the last book. Which makes me both sad and happy – there needs to be an end, there is nothing worse than a series being drawn out for no reason and seeing your beloved characters languish unnecessarily. In this one Ethan, Merit, and the Cadogan House are facing another threat to themselves and Chicago. The regular cast of characters show up although when Mallory and Catcher were discussed being married I was thrown off because I had forgotten that part!

This book doesn’t exactly stray from the formula its established previously but that’s exactly why it worked for me. I like that formula, hence the reason I’m reading #12 in a series. One of the things that is different about this one is that in the past it drove me crazy how much the city of Chicago is so against all supernaturals. It’s understandable and explained but still drove me crazy. The sups are still hated but by the end of the book I felt a palpable shift that I’m strongly hoping carries through to the last book. It gave me hope that maybe the last one would end on a really positive note for their future in the city since the city is definitely another character in these books.

The parts of the series that I love were present here – Merit’s friendship with Mallory was strong again. I got to laugh at them talking about sex but also see them discussing relationship issues. Ethan and Merit had some issues but I enjoyed seeing them work it out. The dialogue was on point for me. I laughed out loud at a few conversations.

“He gave you an alphapology.”

“An alphapology. The apology made by the alpha male, which isn’t really an apology, but more reason for insane behavior. Catcher does it all the damn time. Drives me up the wall.”

But the best part was the end. If you’re a fan of this series I don’t know how you couldn’t love the ending. It made me want to give the book 5 stars. But then I had to think objectively again and realize overall the plot was still only 4 stars – but the last 10% SO GOOD!! I can’t wait for lucky # 13!