While it seems like I’ve been reading, collecting (or “hoarding” if you ask my wife) and been a general fanboy of comics all of my 40+ years of life, there really is one book, one definitive moment when it became official. That book and that moment is not unique to just me, in fact the answer is almost cliche amongst the post silver age comic fandom (The young-uns of today would probably point to some manga or some bloated 90’s comic that is more flash than substance, so let’s not ask them). So while in the first half of 80’s I was getting some Transformers and G.I. Joe comics at the time (a glorious time when they had actual animated television commercials for specific issues that aired during after school syndictated cartoons of usually the same property), if it wasn’t for Frank Miller’s Dark Knight Returns, I would not have become a “Comic Book Guy”. If it wasn’t for Frank Miller’s Dark Knight Returns, there would not have been Tim Burton Batman films, or Christopher Nolan’s Dark Knight trilogy (We unfortunately still might have gotten Joel Schumacher’s campy Batman & Robin without Frank Miller’s reinvigoration to the Bat mythos and continued the Adam West legacy). That recent Batman v Superman movie? Elements and the spirit of it are directly lifted from Frank Miller’s The Dark Knight Returns at its core.

DC Comics was still struggling to get the public to reaccept Batman after the techo-colored 60’s biff bam pow same Bat-Time same Bat-Channel series, even though they had Dennis O’Neil and Neil Adams bringing the character away from being the Caped Crusader and back to his grounded dark vigilante roots. So Frank Miller can’t solely be credited with doing that, but he did do it with the attention grabbing spectacle that the comic’s industry needed.

So If you are unfamiliar with Frank Miller’s seminal Classic The Dark Knight Returns, you first need to know is that it’s in the “What’s the greatest comic ever written?” conversation along with Alan Moore’s Watchmen, Art Spiegelman’s Maus, and Neil Gaiman’s Sandman (there are others that could be listed here as well, but they are wrong). It is also the answer to the “what is my all time favorite comic book?” question.

In the most basic of a nutshell, the story is about 50+ year old Bruce Wayne coming back out of retirement to re-don the mantel of Batman since he never finished his war on crime. Gotham still needs saving and the world has a different, more jaded view of heroes which gets fully dissected. Oh, and Batman kicks the holy living crap out of Superman.

I first discovered and bought the third issue (of the four issue series) titled “Hunt the Dark Knight” as it was released at Fourth World Comics, way back when the store was located across from the St. James firehouse in a tiny, practically hidden, perpendicular strip of shops.  30 years, a different owner, and two more locations later, I still get my weekly books from Fourth World, now (for probably twenty-something years by now) run by Glenn and his wonderful family and staff.  I couldn’t say that if it wasn’t for Frank Miller’s Dark…you get the idea.  Also needless to say, I got the rest of the issues….and then some over time.

The Dark Knight Returns as been adapted for animation twice.  The second time as full, true adaptation done in two parts (or combined as a deluxe feature).  The first time as a short sequence as part of an anthology episode of the Bruce Timm classic Batman: The Animated Series during it’s later re-styled run.  Since my absolute favorite what-got-me-into-comics comic was done as part of my absolute favorite television series (yes, something animated is my favorite series, and it’s Batman…shocker, right?) of course I have this multiple signed seri-cel from the episode hanging in my living room:

Over the years, I’ve gotten “a few” different editions of the classic (I’m going to go out on a limb and assume readers of this site’s blogs can relate to buying multiple editions of one of their favorite books); from my original, comic sized dog-eared first trade paperback, to first edition hard cover, to leather bound collection, to 10th anniversary slipcase (also 2x signed) HC with 3 volumes of extras, to deluxe oversized B&W noir edition, to the (formally considered) gigantic Absolute edition.

Then this bad boy arrived, which is why I’m crafting this blog of potentially epic proportions: 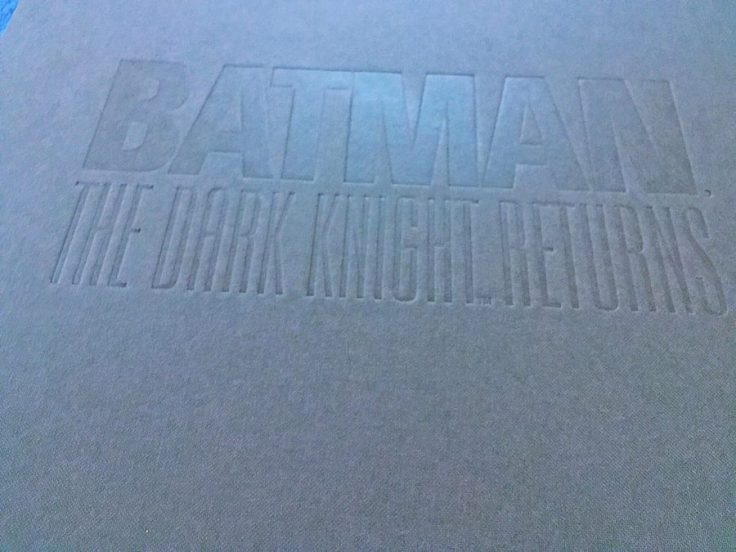 In its faded blue slipcase by itself with no context, you have no idea of scale or size: 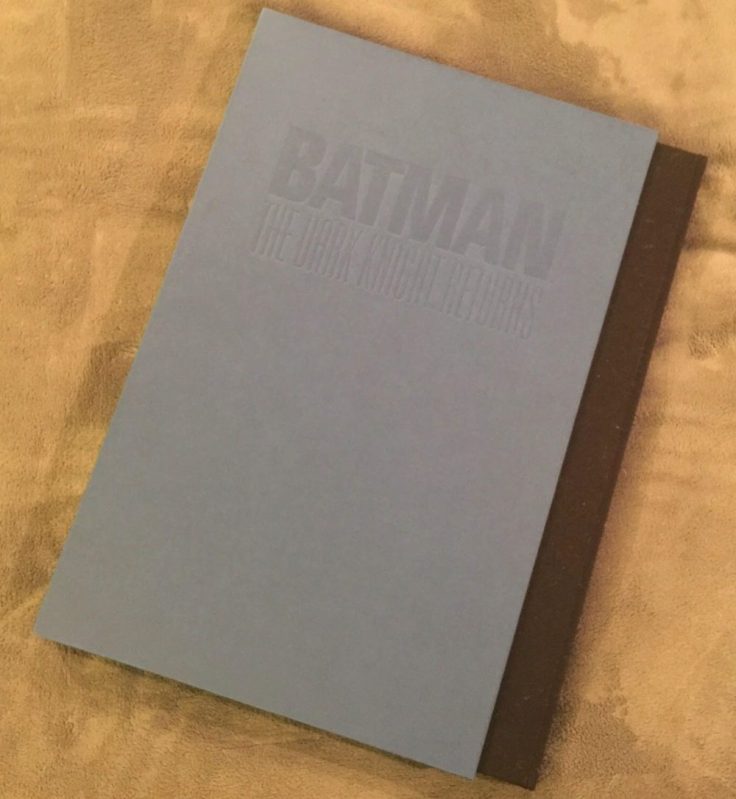 This tome reproduces the original blue-line artwork pages at their original drawing size.  It is not for someone as their first experience with the story. This is for the Dark Knight Returns gourmet, for the comic book connoisseur, for the pundit of the paneled page.

So for that elusive photographic context, here it is next to the previously shown deluxe oversized B&W Noir edition and the (formally considered) gigantic Absolute edition:

The edition I opted for comes signed (in pencil? Doesn’t smudge thankfully) and numbered limited to 275 copies. 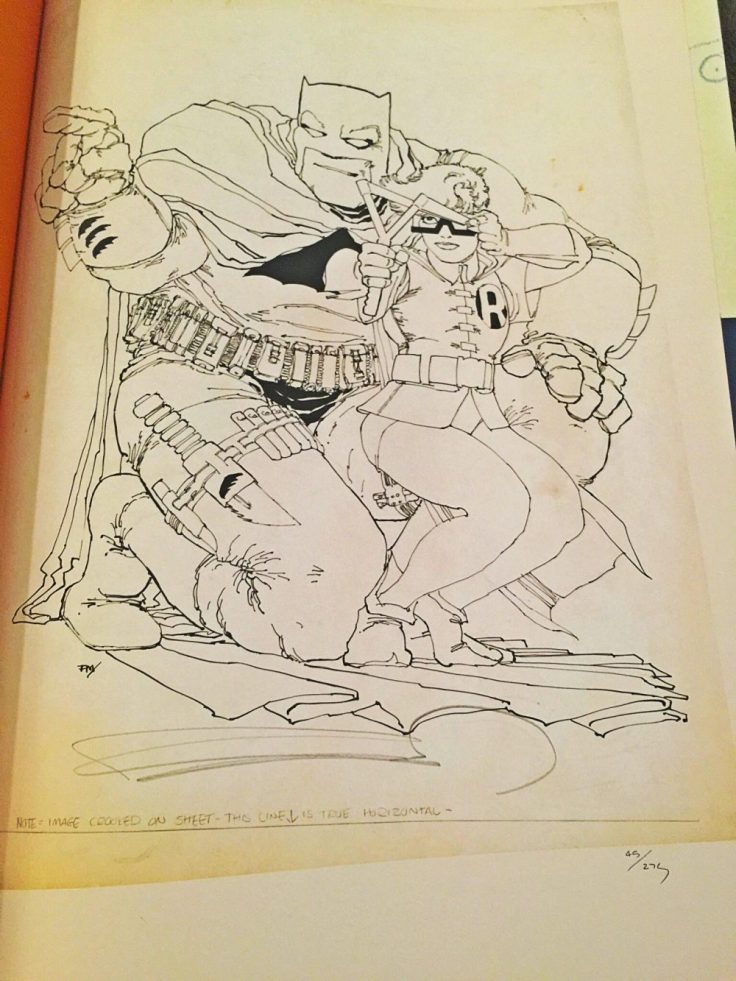 The signature page features the the original art for a prior edition’s signature page.  This particular art also inspired the first ever Dark Knight Returns statue (yup, got it, thanks to my not-yet-then-wife, who bought it at Fourth World Comics):

Graphitti Designs has published other Gallery Editions for DC Comics, all of which painstakingly research, track down, compile and reproduce the original artwork pages, most long dispersed into the hands of private collectors.  This edition for Frank Miller’s epic is no exception, and goes beyond.  This has inks and roughs on velum overlays to show progression and content that changed or evolved over the course of the story’s creation to final product. It’s more than an exploration of the craft, it’s a celebration of the art form.

Ooooooo, the original dialogue was “Rest in peace, Jason”.  It’s little things like that which makes what Graphitti Designs has done so fascinating.  They even included fold outs of rare promotional artwork and additional work, done various editions released over the years which never has been compiled in one place.

This is an edition to savor over time, to analyze and rediscover, and ultimately to celebrate a masterpiece. A triumph by Graphitti Designs, the (understatedly referred to as) regular edition is available online and at good comic shops like Fourth World Comics (you can find your local shop at http://www.comicshoplocator.com) which will also carry other, more standard, versions of Frank Miller’s Dark Knight Returns if you read this far and yet have not read the story.  A variant cover edition and signed edition are available at http://www.graphittidesigns.com in their Gallery Editions section.