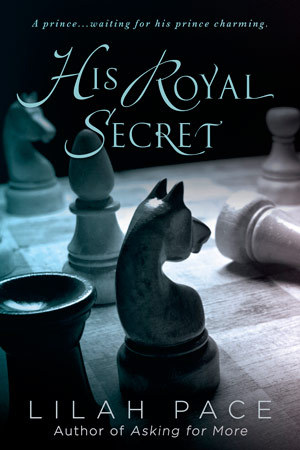 I love Lilah Pace’s writing, I read her Asking for More books and thought her writing was captivating so I was so excited for this LGBT book to come out. This book is exactly what I needed! Since I read it I’ve been randomly recommending it to everyone I know who reads male/male romance.

The idea driving this whole plot is the question of what if the man in line for the British throne was gay? I found this to be a very thought-provoking question to kick off this excellent duology. The man in line for the throne in question, James, had grown up knowing that he would take over the throne but that’s always come with more than just the obvious huge responsibility. At first it seemed that this could be another closeted case of high visibility gay man. But it was fascinating to follow the logical arguments of why it would extremely hard for him to come out. The main difficulty being that he would be both the head of Great Britain and the Anglican Church. But on top of that his sister has major mental health issues, making it nest to impossible for him to just step aside from the line of succession.

Pace dealt with all of the above in such a wonderful way. I really enjoy when books I read also educate me without sounding like a schoolbook. This one managed that. All of the issues raised about running Great Britain and bring the head of the Anglican Church were really interesting to read about and something that had never occurred to me. Beyond that, the author dealt with mental health issues beautifully. I can’t imagine being in such a public eye and dealing with something so difficult but James struggled with handling his sister and he didn’t always handle it correctly. I liked that he didn’t always have the right answer, but he also didn’t want to sweep her issues under the rug which I think is super common with a lot of mental health issues in many books. This is dealt with head on.

Now the romance between James and Ben was so great! It started from pretty much the beginning and what was so great about it is that there was major tension that came from their relationship and it just grew and grew throughout. The tension came specifically from the sneaking around and hiding they have to do. It made me anxious on their behalf. They were both super secretive and casually not so much. That juxtaposition was driving me crazy in a good way – I was so worried for them. I did get frustrated that Ben’s portion of the story line wasn’t fully developed enough but this IS a duology, with the second part coming out in October. So I assume his story will be told more fully then.

I highly recommend this book!

Check out the Contest Page for our latest giveaways!

Don’t miss out on the Bookish fun! Subscribe Now!