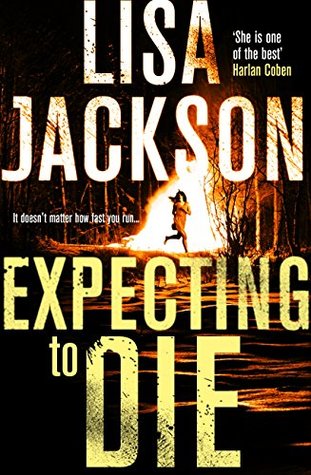 Pescoli and Alvarez are back in Expecting to Die, the 7th installment in Lisa Jackson’s To Die series.

Detective Regan Pescoli is counting the days until her maternity leave. Exhausted and emotional, the last thing she needs is another suspected serial killer. Especially when her daughter, Bianca, is swept up in the media storm. Another body is found…and another. As the nightmare strikes closer to home, Pescoli races to find who’s responsible for the bodies popping up all over town.

It has been 2½ years since I read book six of this series, so some details of previous books were fuzzy. However, that did not stop me from enjoying Expecting to Die. Jackson does a good job of giving details about past events (without a full rehash) to make reading this book feel like reading a stand-alone.

The mystery here was interesting, but there were way too many characters involved. I found myself constantly wondering how one character was connected to the story and wishing I had been taking notes. Some of the enjoyment in trying to figure out who was behind the killings was lost in my confusion among the number of characters. However, that didn’t stop me from trying to guess who the killer was. And I was wrong every time! Jackson does a good job of building mystery and keeping readers guessing (this reader anyway), but I felt the ending was rushed. When I finished the book I wished Jackson had left out some of the characters, some of the background story in order to really focus on closing out this mystery with a bang. Yes, I was surprised, but I wanted a little bit more.

Will the series continue? Jackson has certainly left it open for at least one more book, which I would definitely like to see. A book that would wrap up the personal lives of Pescoli and Alvarez and give this reader closure. Plus, I do love a good mystery and the town of Grizzly Falls is full of mystery. If you want a mystery solved by some kick-ass female detectives, give Jackson’s To Die series a try.

I received an advanced copy of this book from NetGalley.