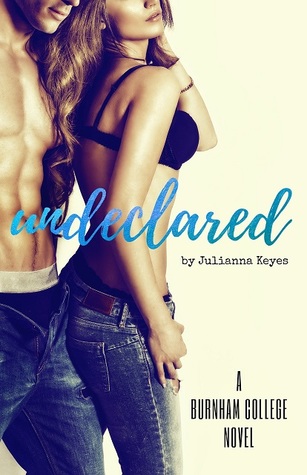 Genres have a natural upswing and downswing of their popularity but I don’t always read according to what’s popular. I read according to what I’m in the mood for. New Adult was pretty popular a few years ago and I really enjoyed the well written ones and one of the best I read was Undecided by Julianna Keyes. It was funny, smart, and had heart – which when you combine the three are pretty much the essentials. So now New Adult isn’t super popular so I’m not seeing as much of it out there, even though I’m still interested in it…enter Undeclared, the follow up to Undecided!

Undecided was really popular with my friends and I. I don’t know if it has a big following or not. But it SHOULD!  Undeclared follows Kellan – the roommate from the first book. He’s had to take a serious look at his life after everything that happened last year. He realizes that he’s made some major mistakes in the past and tries to take steps to fix those mistakes. When Andi, a hometown girl from his past, pretty much wants nothing to do with him, Kellan goes to great lengths to try to make things better with her.

On her part Andi just wants to try to avoid Kellan. But for all she tries she cannot get around seeing him when he’s everywhere she turns! Andi makes him work for his redemption, which really worked for me in turn. I can’t stand when them women in the books I read give in too easily and make it an easy thing for the guys to get away with.

This was such a good second chance romance for me. Supporting characters are key and while Kellan and Andi are extremely strong, the supporting cast in this series are those characters that you spend a book saying omg I want their book next!! When that happens you know an author did their job beyond well. Marcella is great but Choo is amazing. I want more Choo! The friendship amongst all the guys in these books felt so real to me without being forced.

One thought on “Book Review: Undeclared by Julianna Keyes”