Book Review: You Will Pay by Lisa Jackson 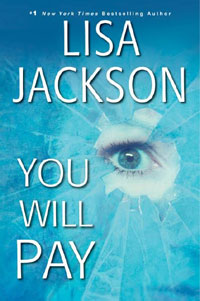 I’m getting older and my memory isn’t what it used to be. I’m finding it harder and harder to keep track of the characters in books. You Will Pay had so many characters that my head was often spinning with the effort to keep track of who was who and what their story was.

It starts twenty years ago at Camp Horseshoe. Before the summer is over there are four missing people – 2 teenage girls, 1 teenage boy and an escaped convict. How could four people disappear without a trace? Enter all the characters I had trouble keeping up with. In addition to the four missing people there are the numerous counselors and campers that were also there that summer. And each has their background story. It was too much and overwhelming for this reader.

Twenty years later with the discovery of human remains in a cavern at what used to be Camp Horseshoe, everyone is returning to town in the hopes that they’ll finally put this mystery to bed. Enter the same characters again with updates of where they are now. *sigh*

Told is alternating voices and time, I felt Ms. Jackson spent quite of bit of time repeating facts. She would state something one way and then again a bit later only varying the text a little. It was almost as if Ms. Jackson didn’t know what to write, so she filled space with restated facts. The pace was slow until approximately the 80% mark when I thought the story was going to take off. But in the end still left this reader feeling something was missing. While the pieces of the puzzle are put together nicely and I never guessed what happened, ultimately I was disappointed in this book. The mystery was good there at the end, but it felt buried under too many details.

I received an advanced copy of this book from NetGalley.

Title: You Will Pay