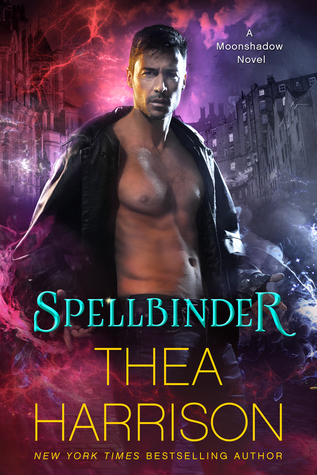 Spellbinder is book 2 in the Moonshadow trilogy by Thea Harrison. I absolutely loved the Elder Races series and this is a spin off of that series. You can read these books as a stand alone without any confusion but it was enjoyable for me to have the world building already established for me. I also really liked seeing names and characters popping up here and there that I recognized from the Elder Races.

Spellbinder picks up pretty much where the last one left off – with the puck Robin wanting vengeance for everything that’s been done to him. Morgan le Fae is where he focuses that anger, since he is the one who carries out Isabeau, Queen of the Light’s, orders. This is a classic redemption story. Morgan is the character from fairy tales, and from the last book even, that we are naturally going to hate. I was fascinated to find out how Harrison was going to redeem him. The more that is revealed about him, the more I wanted to know which I think is hard to do with a character the audience already has negative feelings about. We discover that Morgan has been forced to be the head of Isabeau’s evil Hounds and has been stripped entirely of his free will.

At the beginning of Spellbinder Morgan is able to escape her orders for the first time, but only for a limited time. When he finds himself with time on his hands he re-discovers his love of music and finds a treasure – Sidonie Martel. She is able to capture everyone’s hearts and minds with her beautiful music.

Her music ran through him with electric energy, more joyous than anything he could remember and more painful than silver.

When Robin discovers how much Morgan enjoys Sidonie’s music he maneuvers to kidnap her and send her to the Light’s dimesne. From there the majority of the plot kicks in with Morgan trying to figure out how to rescue Sid. The author has a wonderful way of writing that is almost poetic in her dialogue. Morgan and Sid connect in such a way that seems to spark right off the page for me and I began to not only root for Sid but also for the two of them to fall in love very quickly.

Your music hurts, the way sunshine hurts when you’ve existed for a long time in darkness.

More aspects that I really loved about this book: that there were pieces of Arthurian legends woven throughout. When Morgan le Fae is your MC how can there not be pieces, right? I also loved seeing the puck again and hope he’s back in book 3. I *really* hope he’s the hero in that one…but only time will tell. The author’s amazing world-building that she set up so solidly with the Elder Races is continued here and even expanded upon. Reading paranormal books can be intimidating for that reason and if you don’t get that world-building right then the book is pretty much sunk because I get distracted with too many inconsistencies or issues within the story. Luckily, that’s not the case here!

He cupped her head with both hands. “You’re full of your own kind of magic, and it’s much more rare and beautiful than all the other spells around you. They are commonplace. You are unique.”

This book is so incredibly romantic which I really loved! That can sometimes be ignored in paranormal books but again, not the case here. The ending had me feeling a little swoony and the epilogue was perfection. I *highly* recommend both The Elder Race series and this spin-off trilogy.

ARC provided via Netgalley in return for a review.