Just like with Elle Kennedy, who I reviewed last week, I love Kristen Callihan’s work in many different forms. But her Paranormal Romance books are how I was introduced to her and what I love the most from her. This is the last in her Darkest London series and while I’m sad to see them end, I’m also happy she didn’t draw them out forever as ending on a high note is key. And this is such a high note for these books! 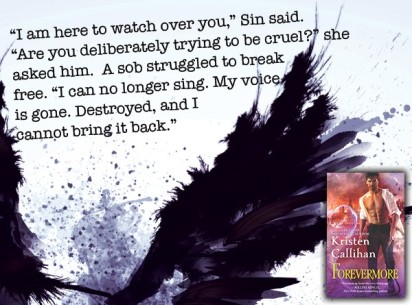 I was worried to see how this would end since I love the series so much but luckily I didn’t need to. This book was a balance between St. John (Sin) Evernight and Layla Starling as well as Augustus and Lena. At first going between the two couples threw me off but then the chemistry between them made me love the book all the more for having both couples in it. Sin and Layla are the main couple and Sin’s pain made me root for him immediately. While he’s insisting he’s a bastard he’s pretty transparent and Layla works at seeing through his layers.

This is such a great conclusion to the series!!

USA Today bestselling author Kristen Callihan is a writer because there is nothing else she’d rather be. She is a three-time RITA nominee and winner of two RT Reviewers’ Choice awards. Her novels have garnered starred reviews from Publishers Weekly and Library Journal, as well as being awarded top picks by many reviewers. Her debut book, Firelight, received RT Book Reviews’ Seal of Excellence, was named a best book of the year by Library Journal, best book of Spring 2012 by Publisher’s Weekly, and was named the best romance book of 2012 by ALA RUSA. When she is not writing, she is reading.

Don’t miss out on any of the Bookish fun! Subscribe Now!