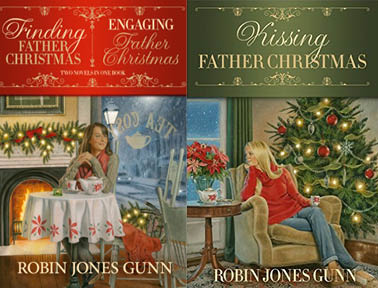 I’m doing something that I’ve never done before … reviewing a complete series. Today I’m chatting about the Father Christmas series by Robin Jones Gunn. This series, currently made up of 3 novellas, will make a nice addition to your holiday reading list.

In Book One, Finding Father Christmas, Miranda Carson’s search for her father leads her to London. Immediately welcomed into her biological family, she faces a terrible decision. Should she reveal her true identity? Or carry the truth home and remain alone in this world? In Book Two, Engaging Father Christmas, Miranda returns to England for Christmas and to be with her boyfriend, Ian. She has spent a lifetime yearning for a place to call home, and she’s sure Carlton Heath will be it. In Book Three, Kissing Father Christmas, Anna returns to Carlton Heath at Christmas. Her first visit was last May for the wedding of her cousin Ian. The event that ended with an unexpected kiss from Peter.

Book one was not as much of a romance as I anticipated but was more a story of finding family. And finding them at the most magical time of year. Books two and three were much more romance focused than book one. As I’ve mentioned, each book in this series is a novella. It was like listening to the abridged version of an audiobook. While I enjoyed each book I wanted all the juicy details that probably would have been included if these books were full-fledged novels. However, I liked each of the characters and will read the next book in the series if the series continues. And I hope there are more books! While the current stories are short, I’m invested in the characters and want to know what else is happening in their lives.

Overall, I thought this series was charming and heartwarming. Give it a try.

I received a copy of these books from NetGalley.