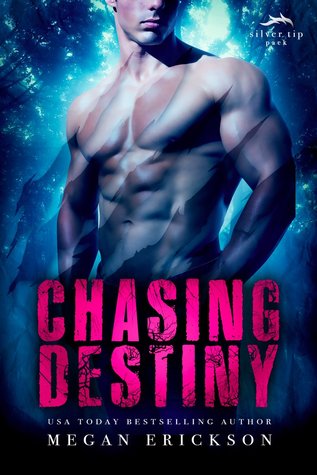 Chasing Destiny is book 2 in Megan Erickson’s werewolf/zombie apocalyptic series. And that sentence just sounds odd but I LOVE this series and highly recommend it. I was really anticipating this book and it did not let me down at all.

This is a series that you really need to read book 1 to have the world building already there to know what is going on and have that foundation and knowledge. We were introduced to Bay in book 1 and fans have been anxiously awaiting his story – including me.  Bay is Dare’s brother, the pack’s alpha, and he’s been unhappy and feeling like he needs to DO something lately. The man he loves and always saw himself with long term, Nash, sacrificed his life to save others in the pack a few months ago.

When he goes on a reconnaissance mission to another pack he’s shocked to find Nash alive, although not so well. Bay immediately wants to know what has happened to him, to reconnect, and to pick up where they left off previously. But Nash has other ideas. As soon as we were introduced to these two I fell for their dynamic. Their chemistry and their push-and-pull drew me in. I wanted to know their past, present, and future as well as all of their secrets. The author did a wonderful job of layering their intense history with their present with so much passion.

“My fear,” Nash said, “is that you want the Nash you thought I would be. And I’m not him.”

Nash has endured a torturous past. Literally. We get bits and pieces of his past dribbled throughout the book and it’s done in such a way that managed to not drive me insane. I related to Bay as he was frustrated with not knowing exactly what happened to Nash but he never gave up on him.

“It was what kept me alive, Bay. The memory of you.”

While this story is very much a love story between these two it’s also an action story and that part is also very well done. In the last half of the book the group gets back to the Silver Tip pack and from there the action picks up and it’s extremely fast paced. With that I found the whole book very well balanced. The first half concentrated more on the couple, the second half more on the action but together we get an entire story that completes the couple’s HEA. Which, importantly for me, we DO get!

I do love a second chance love story and this is one that I adored since it features a shifter previously thought dead. What makes this second chance love story even better is when the readers are already familiar with the characters from previous books. This book was super steamy and I absolutely loved that the couple managed to evolve so much within this book and have such a great HEA. I cannot wait for the next book already!