I’m a huge fan of Kit Rocha’s Beyond series. It’s incredibly sex positive, feminist, and, of course, so well written! So I’m really excited to help the authors – who consist of the wonderful team of Bree Bridges and Donna Herren – reveal the re-branded cover of novella #5.5, Beyond Possession. Without further ado – here it is! 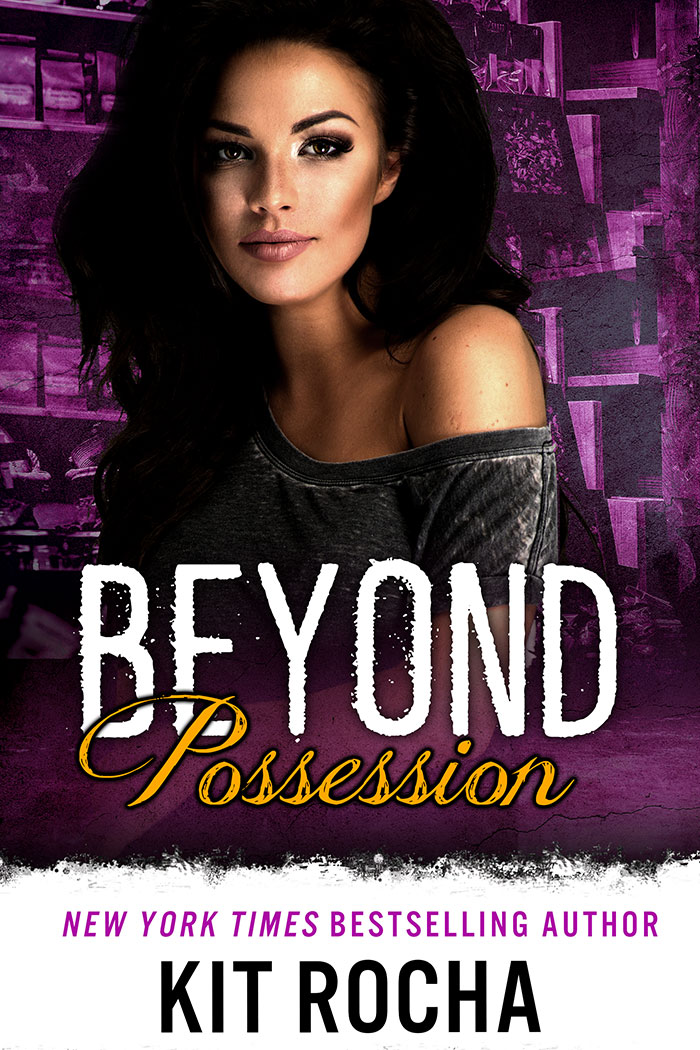 I am in love with it! Tatiana is one of my favorite heroines because a self made business woman is one after my own heart. This cover really puts me right in Sector Four, wanting to buy some candles of my own. Having a woman on the cover feels *exactly right* for the Beyond series to me. This entire series puts power in women’s hands so if you’re looking for something to give you HEAR ME ROAR sentiment? This is seriously it.

I had a lot of choices when it came to Tatiana, because she goes on a wild ride in her novella. She starts from a place of hopelessness, and moves slowly to hope and then happiness. I wanted to catch her in the middle of the transition, and I love the model we found. She’s not even really smiling, but there’s something in her eyes that makes it clear she’s on the verge of it.

Of course, when it came to the background, I only had one choice. Behind her are shelves of her supplies and merchandise. The soaps, shampoos, candles, lotions and other goods she’s slowly built her business on.

Tatiana Stone has worked hard to establish herself as one of Sector Four’s most skilled crafters. All she wants is peace–but the sins of her father haunt her. He ruled the sector as a petty tyrant before the O’Kane takeover, and plenty of people harbor bitter memories of his cruelty. Especially now that Tatiana’s beloved baby sister has fallen in with a man who wants to start a revolution.

Zan failed his boss once, and it won’t happen again. So when Dallas O’Kane asks him to defuse the rebellion brewing in the sector, he’ll do whatever it takes to get the job done–including seduce Tatiana. It’s the perfect opportunity to get closer to the pretty crafter and complete his mission. But what he discovers is a fiery, passionate woman–and an affair that could destroy them both.