One Tuesday Morning: My Trip to New York City

Today I’m taking a break from book reviews to tell you about my trip to New York City. I spent a few days there last week to help a friend and her son with their 9/11 project.

September 11, 2001. I imagine we all remember where we were that morning when we first heard or saw the news. I was working as a bank teller and found out when a customer came in and shared the news. It wasn’t until I got home that evening that I could see the horror for myself.

My friend, Hope, was working in New York City. She lost friends and saw things that forever changed her. It wasn’t until someone gave her a copy of Karen Kingsbury’s One Tuesday Morning that healing began to take place. Now every September 11th, Hope and her son, Kingston, travel to Ground Zero to hand out copies of the book that helped Hope so much.

For a couple of years I’ve supported the project by donating copies of One Tuesday Morning. This year I had the great honor to travel to New York to help. I was joined by my mom and friends, Michelle and Christine. We embarked on a journey to The Big Apple to witness this wonderful project in person, something I’ve wanted to do for years.

It’s been days since I returned home, and I still can’t adequately put into words what I experienced. Kingston had 300+ copies to hand out this year. I am in awe of this eleven-year-old boy that approached stranger after stranger with the prayer that they too would be healed a little by this book. Each book included a handwritten note from Kingston. What I’ll always remember are the expressions on the people’s faces … from confusion, to wonder, to thanks. I wish I could properly describe it to you. 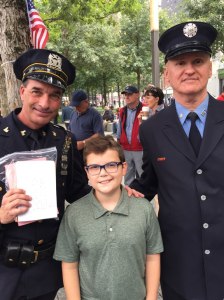 While Hope’s project was the main reason I traveled to New York, being in the city also allowed me the opportunity to see the brains behind Bookish Devices and one of my favorite bookish friends, Jess.

Jess and I got to have brunch together before I left the city. Unfortunately, because of Hurricane Florence I was forced to leave the city a day early and Jess and I had to miss a planned tour of St. Martin’s Press. Bummer! But we did get to enjoy some book talk over a meal.

I had been to New York only one other time previously and never thought I would have the opportunity to go again. This trip was so much fun! Will I ever have the chance to visit NYC again? I don’t know, but I hope so!

If you’re planning a trip to NYC, here are a few musts that should be added to your list.

The first two sites are somber visits and gave me a clearer picture of that September day in New York. I’ll never completely understand what people experienced, but for a few minutes I could sit in that pain. Visibility wasn’t great when I visited One World Trade, but I can just imagine how awesome the views are on a clear day. The trip up wasn’t a complete bust though. Want to know what I’ll remember most about my trip up the tower? A bumblebee that was flying right outside a window that is approximately 1,250 feet up. Aren’t they supposed to be down on the ground with us?! I thought it was amazing!

The last three sites were visited for pure fun! Visit Ellen’s Stardust Diner and hear great music while you enjoy excellent food. Magnolia Bakery has the best cupcakes and banana pudding, hands down. If you have a sweet tooth like me, it’s a must stop if you’re in the city. Remember the 2001 movie Serendipity and the cute little restaurant by the same name where John Cusack’s and Kate Beckinsale’s characters go? The restaurant actually exists, and it was with a big goofy grin that I enjoyed some of the best chicken salad I’ve ever had along with a frozen hot chocolate for dessert.

Well friends, that’s all I’ve got for you today! Thanks for letting me share my trip with you! My regular book reviews will return next week with a look at the Jodi Picoult’s latest.

2 thoughts on “One Tuesday Morning: My Trip to New York City”