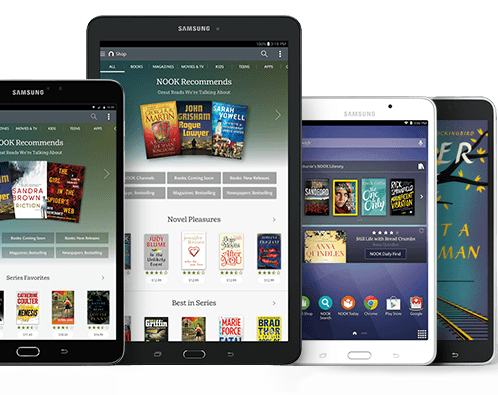 Barnes and Noble closes its app store and discontinues movies on its Nook devices. Nook users need to act now to keep their content.

It has been announced that after March 15th, 2016 Barnes and Noble will no longer be selling third party apps through its store. This means that current users of Nook tablets will no longer be able to add content from Barnes and Noble directly. According to the Barnes and Noble website, users will still be able to access previously purchased content as well as purchase new apps through third party providers such as the Google Play shop. After March 15th, customers will also no longer to update or purchase in-app content for previously purchased apps, but they will have full access to anything that has already been downloaded to their Nook device.

Full details of the Nook App transition can be found at the Barnes and Noble website.

For Nook Video users, the change is a little more drastic. In addition to ceasing to sell movie and video content after March 15th, according to the Barnes and Noble website, “after April 30, 2016, NOOK will no longer support the playback of your purchased NOOK Videos on the NOOK Video app or compatible NOOK devices.” This means that users need to make alternate arrangements to view their already purchased content. Agreements have been made for users to migrate their video accounts to CinemaNow and/or Disney Movies Anywhere depending on the individual movie. Nook users will need to create accounts with the appropriate company and transfer their digital content. Migration will be available beginning April 4th.

For more information about the Nook Video transition please see the official Barnes and Noble FAQ.

For those of you asking, “what about my books?” the answer depends on where you live. For US customers, Barnes and Noble has stated:

“This change is being made to concentrate our focus and efforts on our core digital content business, which are Books and Newsstand, for our US customers.

We will continue offering to US customers our full service for NOOK Books, NOOK Magazines, and NOOK Newspapers on both NOOK devices and our standalone Reading Apps. We look forward to continuing to bring the best content discovery and reading experiences to our NOOK customers.”

However, if you are a UK Nook user, you’ll be migrating your book and newsstand content as well. Barnes and Noble has announced:

“Effective from March 15, 2016, NOOK will no longer sell digital content in the United Kingdom. The NOOK Store on NOOK devices sold in the UK, on the UK NOOK Reading App for Android, and at nook.com/gb will cease operation.”

UK readers will be able to migrate their accounts to Sainsbury’s Entertainment on Demand in order to maintain access to their digital content.

UK Nook users should check out Barnes and Noble’s FAQs and public statement for complete information.

So what do you think? Was this just a long time coming? Are you a US Nook user? If you are, will you continue to purchase digital books from BN or will you migrate to another platform?